The State of Church Giving through 2003 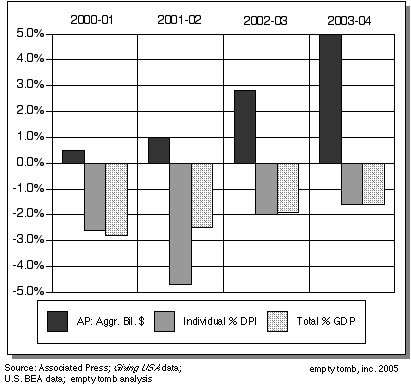 Table and Chart regarding the Disparity between Associated Press Reports on Aggregate Charitable Giving Levels, and Giving Adjusted for Population and Income. As pointed out above, the Associated Press charitable giving articles’ lead routinely emphasizes the upbeat tone of the Giving USA press releases in terms of aggregate billions of dollars raised, unadjusted for population and income. This pattern of disparity between AP reports on aggregate billions of dollars raised, and the complete picture of changes in charitable giving patterns, can be observed in Table 24.

Figure 16 illustrates the disparity in the category of percent changes in aggregate charitable giving reported by the AP and the two categories of charitable giving as a percent of either per capita Disposable Personal Income (DPI), or Gross Domestic Product (GDP).

In 2002, 2003, 2004, and 2005, the AP lead uncritically emphasized the aggregate billions of dollars raised, as promoted in the related AAFRC Giving USA press release. However, in all four years, the available Giving USA data indicated that charitable giving actually declined from one year to the next, when considered as a percent of either Disposable Personal Income or Gross National Product.

The observation may be made that the Associated Press chooses to highlight an industry’s interpretation of its own work in an uncritical fashion that omits essential elements of the whole truth. Perhaps the Associated Press regards the annual news about Americans’ giving patterns more on the level of society galas than as a vital indicator of the social fabric. (pages 78-81).