The Yoking Map was created as a means for the church in the U.S. to take initiative in loving our global neighbors in Jesus’ name. 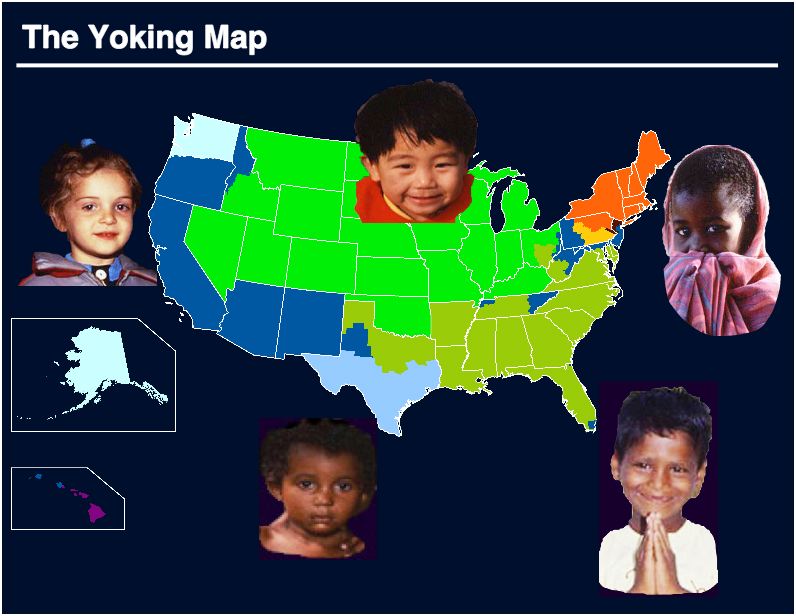 Christians may want to help people in need but are often overwhelmed by the amount of information available about need in the world. Yet, even though world need is great, church members in the U.S. have access to great resources to help both domestic and international needs in Jesus’ name.

The Yoking Map provides a strategy to help people focus their resources in a coordinated way by matching church members in each U.S. county with a country in need.

Chapter 8 and Appendix D from The State of Church Giving through 2002 (by John and Sylvia Ronsvalle, empty tomb, inc., 2004), presents an overview of the Yoking Map designed to keep Christians in the U.S. focus their global concern in an effective manner.

One can know the number of historically Christian church members in each county in the United States, as well as the per capita income in that county. With this information, the difference between present giving levels and potential giving levels can be calculated for each U.S. county. The result was defined as Resource Units.

Need Units can be calculated for every nation that posted less than the global average per capita Gross National Product (GNP), and/or less than 50% self-professed Christians as a percent of population. Because of the greater expense associated with addressing physical needs, the per-capita GNP factor was weighted ten-to-one with the percent Christian factor.

The resulting Need Units in other nations were matched with the Resource Units among church members in the U.S.

The allocation of Need Units place the word and deed need of each nation and region into relative relationship with the rest of the globe. The percentage of Need Units allocated to each nation was based on how the percentage of Christians, and the per capita GNP factor for that nation compared to other nations defined with needs. It is not being suggested that the potential Resource Units of Christians in the U.S. are adequate to solve every problem in every nation. Certainly, the continued and expanded missions involvement of Christians in other nations is of vital importance as well. What the allocation of Resource Units of U.S. Christians among the Need Units of nations around the globe is meant to accomplish is a fair distribution of the potential additional Resource Units that could be available if Christians in the U.S. chose to increase giving to a congregation-wide average of 10%.

Yoking Process. Matching began with Texas and Latin America, both because of their shared border and also because of cultural connections.

The former U.S.S.R. had been matched with Alaska. In the present Yoking Map update, Russia was matched with Alaska, and extended through Washington into Oregon. The other nations that were formerly in the U.S.S.R. were matched with states on the East Coast, as they geographically extended east or southeast of the European nations with Need Units.

The rest of the West Coast and the Southwest were matched with East and Southeast Asia.

India was matched with church members in the Southeastern and Southern states for the most part.

China began in the Western states and continued through the Midwest.

Africa was matched with the northeastern states. The middle eastern nations were matched with counties in the Northeast as well.

Oceania and Japan were matched with Hawaii.

For a more complete discussion and details of the Yoking Map, see chapter 8 and Appendix D from The State of Church Giving through 2002.

1 John and Sylvia Ronsvalle, The Hidden Billions: The Potential of the Church in the U.S.A. (Champaign, IL: C-4 Resources, 1984).

©2001- empty tomb, inc. All rights reserved. For information on citing the copyrighted materials of this site, please see the empty tomb, inc. Trademark and Copyright Information page . The contents of this web site pertaining to the works and name of works of empty tomb, inc., including but not limited to, Christian Family to Family Relationships, Christian Health Services, Clothing Work, Free Food Work, Furniture Work, Helping Work, Home Maintenance Work, The National Money for Missions Program (NMMP), Mission Match, Wake the Sleeping Giant, and Discipleship Tree are property of empty tomb, inc. Additionally, the Yoking Map, in name or in concept, as well as the faces of the children of the world, may not be used or reproduced, stored, or transmitted in any form without prior expressed written permission of empty tomb, inc. The opinions and philosophies of the web sites to which this empty tomb site has linked are those of their authors and not necessarily shared by empty tomb, inc.